Why write a script to cross-post tweets? The answer is easy: because some people follow me on Twitter, some on Facebook, others on Google+. And then there are the ones who just read my blog.

How to feed all those followers with information that interests me? I can of course say: just follow me on Twitter if you want to know what’s going on with me, but that doesn’t feel right. I want to feed all my feeds, and for now, Twitter is my main source that should feed the others.
So, I want to post from twitter to Facebook, Google+ and WordPress simultaneously.

The nut to crack is in fact Google+ – there is no API available (yet?) for posting. Facebook can be fed by adding an existing app on Facebook that pulls my tweets into my Facebook wall. Also, there is a Twitter plugin for WordPress that can pull tweets into the blog.
However, those methods do not fully utilize the possibilities of Facebook and WordPress, for example when tweeting a picture, it will be a link on Facebook and WordPress – it will not be posted as a picture. 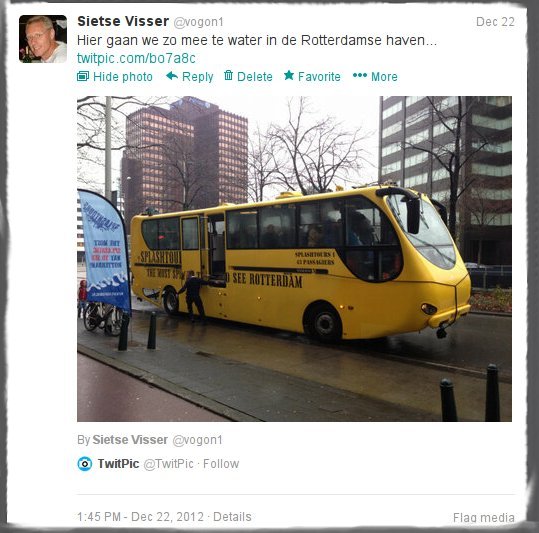 That is fine of course.

Not very nice, right? One would expect a nice big picture instead of a thumbnail with a link.

And this is what it looks like on my WordPress blog:

And how does it look on Google+? Well. There is nothing, I don’t post to Google+ because I don’t want to post something twice.

I used these methods for years for Facebook and WordPress, but I decided it is time to do things different. I am aware that there are services out there that will do some cross-posting for you, but none of them have the functionality I want.

Time to bite the bullet and start writing some code. Or find some useful code on the internet. Or buy some.
In the next blogs I will explain what I did to get things to work the way I want it to work.
To summarize, this is my current situation:

This is what I want:

So I need to figure out how to: